We are very proud to release our second English report The Traffic Hierarchy. The report is a translation of _Trafikmaktordningen _ which was released in December last year and it is also featured in the latest issue of Carbusters Magazine.

Download the full report here [.pdf] or read the introduction and watch a video presentation below.

Presentation of The Traffic Hierarchy 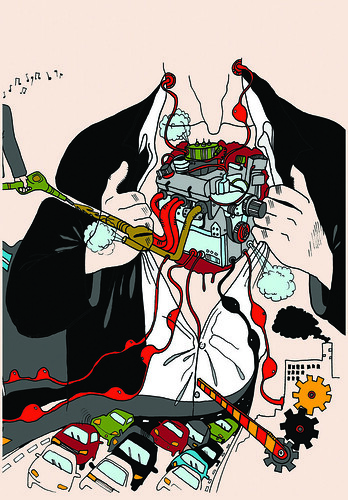 One is not born a motorist, one becomes one.

Mobility and class are deeply entangled. Not only because ones potential for mobility often has to do with ones economic position, but also because a society built on todays mobility paradigm  automobility  directly contributes to growing economic and social differences.

A society which puts the car on a pedestal quite obviously favours motorists. Another obvious fact is that white high-income and middle-aged men are an over-represented group among motorists. And the opposite is true among public transport users. But, a society that prioritises motoring, and looks at ever-growing mobility as an almost magical recipe for development, increases the differences between its citizens and different parts in other ways as well.

The current traffic hierarchy, with the car on top and with public transport, bikers and pedestrians at the bottom, manifests itself in the fact that these means of conveyance are given different amounts of space and resources. With the car on top of the traffic hierarchy we get a society built on automobility: a world where our lives, to a far too great extent, are steered by cars.

This article is written to clarify how the current traffic hierarchy manifests itself and what its consequences are: a society built on automobility does not only pose grave danger from an ecological point-of-view, it also enhances the current notions towards greater economic and social segregation. By highlighting the problems with the current traffic hierarchy and starting to map out the edges of another way of planning and handling movement we hope and believe that we can also give some clues on how to handle other societal problems.

The car is pitching us towards each other. Who has not experienced the feeling of putting oneself in a car and suddenly being transformed into a motorist? The pure act of putting oneself behind the wheel seems, for almost everyone, to lead to egotistic behavior, a situation where everyone is trying to gain something on someone elses behalf. While driving a car, ones fellow human beings (other drivers, public transport users, pedestrians, bikers) become nothing more than obstacles. Who cannot, honestly, recognise the almost aggressive and competitive feeling that the car produces in oneself? Since we do not want to encourage this kind of behaviour, and since we are confident that one is not born a motorist, but rather becomes one, we strongly believe that the risk of people becoming motorists has to be minimised.

Because of this we do not only want to change the order of the traffic hierarchy and take the car down from its pedestal. Rather, we want a society built on totally different premises. A society where no one is forced into motorism, whether passively or actively. A society where proximity and availability to what people need to satisfy their needs and desires are put at the forefront.